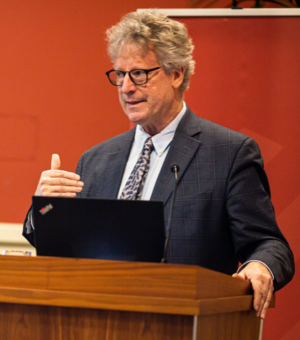 At Oxford, Bill was founding director of the Oxford Internet Institute (OII), and a Fellow of Balliol College. He left Oxford in 2014 to become the Quello Professor of Media and Information Policy in the College of Communication Arts and Sciences at Michigan State University, where he served as Director of the Quello Center, until returning to Oxford as an Oxford Martin and OII Fellow to support research for the GCSCC.

He has recently edited the Oxford Handbook of Internet Studies (OUP 2013), four volumes on Politics and the Internet (Routledge 2014), and a reader entitled Society and the Internet, with Mark Graham (OUP 2014), with a 2nd edition (OUP 2019). His book entitled Society on the Line (OUP 1999) has been particularly influential to social sciences of the Internet. Currently, he completed an edited volume, entitled A Research Agenda for Digital Politics (Elgar 2020) and is writing a book on his concept of the Fifth Estate and another book that will provide an advanced introduction to political communication.